Lefthanded pitcher Jackson Cofer, who has agreed to join the Regina Red Sox for the 2019 Western Canadian Baseball League season, is in the running for the National Collegiate Baseball Writers Association’s Stopper of the Year Award. 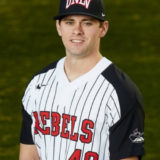 Cofer, a redshirt senior at the University of Nevada Las Vegas (UNLV), is one of 45 athletes named to the watch list for the award which is presented to the top relief pitcher in NCAA Division 1 baseball.

Cofer currently ranks 15th nationally with nine saves. He has made 19 appearances, pitching 25 innings, striking out 24 while issuing five walks. In addition to the nine saves, Cofer has a 2-2 record with an ERA of 2.52.

After three season with Utah Valley, where he pitched 247 1/3 innings in 47 starts, Cofer transferred to UNLV for the 2019 season.

Born in Indianapolis, Cofer is a graduate of Coronado High School in Henderson, Nev. He lettered four years in baseball and two years in football. Cofer’s father is Mike Cofer, a two-time Super Bowl champion as a place kicker with the San Francisco 49ers.

The Red Sox will open their WCBL season on May 29, hosting the Yorkton Cardinals at Currie Field.